The store will not work correctly in the case when cookies are disabled.
Menu

The design was based on a ¼-inch ball size—a very common size used in many other products and therefore available at low prices. Sullivan chose race material in 22-gauge thickness so that it would nicely form into deep races. It was also low cost. At that time, automotive manufacturers used the material extensively, allowing Triangle to take advantage of the low pricing generated by large-volume steel production.

How the Triangle Manufacturing lazy susan bearing came to be

The overall plan was based on a wood platform design with ordinary furniture casters constructed by Morgan Company’s engineering department in Oshkosh, Wis. The purchasing agent asked Sullivan to take a look at their project to see if he could come up with something better. Sullivan was swamped with other developments, but he promised that he would try to invent a solution.

After much prodding by Morgan, Sullivan finally sat down to produce a design. The Triangle tool room was so busy, he had to make temporary tooling in his own little basement shop.

In about 10 days, he submitted samples to Morgan Co. which were quickly approved. Morgan Co. immediately ordered 1,000 six-inch units. Turntables at that time were a central post with crudely fastened shelves. There were ball bearing turntables used in industry, but they were very expensive and never used for the mass retail market.

The lazy susan bearing was designed specifically for use in cupboards that Morgan Co. wanted to build, and Sullivan did not really think of it as being that intriguing. It was almost an afterthought that he told the foreman to add the Triangle name and address stamp on the initial 1,000 parts.

About a month later Triangle Manufacturing began to get inquiries from other manufacturers. Everyone called it something different, including swivel bearings or "that pair of swivel plates with balls." Then a few individuals made inquiries about the plates for use on personal projects, and a few magazines offered spot mentions to describe the Lazy Susan bearing.

Better Homes and Gardens® also offered to publish a "credit" but first checked the company physically and financially to make sure that we could deliver if their subscribers wanted to buy the new item. Triangle Manufacturing met the test, and over the next year we shipped at least 5,000 units to individuals and small enterprises. We sent them by parcel post,and all sales were cash—people even sent signed blank checks with messages of" just send it quick." Thus, was born the Triangle Manufacturing's Lazy Susan bearing. 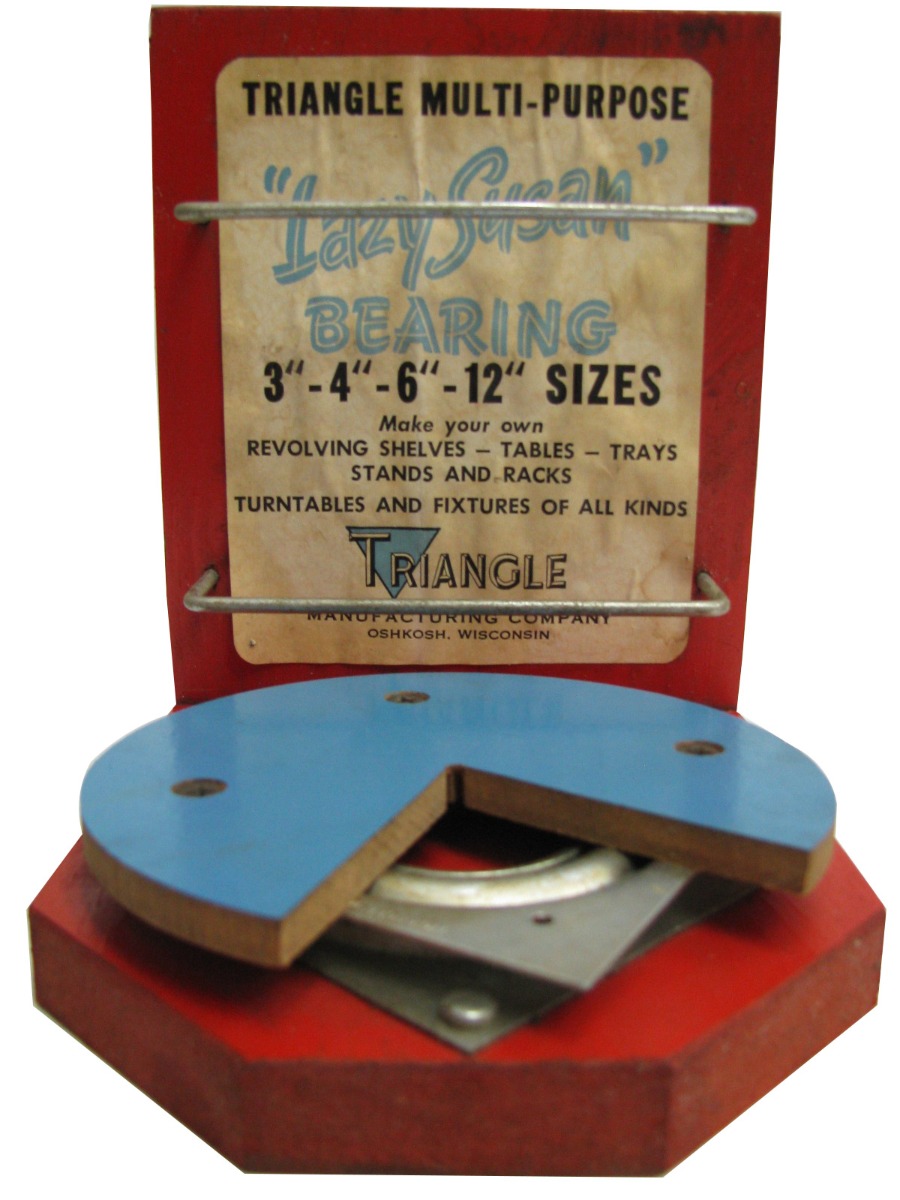 My, how we’ve grown

Today, Triangle is one of the largest suppliers and manufacturers of the modern Lazy Susan bearing. View our product listing page to see our offerings, or contact us today for inquiries.